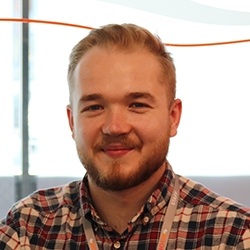 Service Desk Analyst Charlie Toon is living proof that our engagement with local schools has an impact. While looking for jobs in IT he came across a vacancy at Node4, and recalling his school trip to our Derby data centre, didn’t hesitate to apply. Here he describes his journey from school to Service Desk….

I came to Node4’s headquarters on a school visit about seven years ago, as a GCSE IT student. The trip stood out, with the offices right next to Pride Park Stadium. We were given a tour of the data centre and shown the racks, servers and backup systems. Our school was a customer of Node4’s at the time, so we even got to see their servers.

It was interesting, especially as it was my first ever exposure to behind-the-scenes technology. Obviously, we’d worked with laptops and things like that, but I’d never seen anything that goes on behind it.

I chose GCSE IT with an idea that wanted a career in it. I like the fact that if you just sit down and spend half an hour playing around with new software, you learn so much. People think you’re either IT-minded or you’re not, but it’s not like that. You don’t need to be born into Steve Job’s family to be good at it – it’s one of those subjects where it can be self-taught and if you work hard enough, you can achieve things.

It turns out that I didn’t end up going down the IT career path straight away. After school, I joined the Royal Air Force, convinced by family members who’d been in it and the various adventures that were sold to me!

I rose to the role of Air and Space Operations Specialist, specialising in air defence radars. Part of the role was working with all sorts of different networks and equipment on air defence systems. I also had to have some basic troubleshooting knowledge, so when something went wrong with the radars, I had to problem solve, resolve errors and identify if it needed someone more technical.

While I enjoyed my role in the Air Force, I regretted not going into IT. So in December 2019, I began looking for opportunities in the IT sector, where I could quickly work my way up and gain qualifications.

One day, I was scrolling through LinkedIn and Node4 came up as a recommended job. I saw the Node4 the logo and recognised it instantly. The orange, grey and black stood out and took me back to that school visit all those years ago! I got in touch with the recruitment manager to ask some questions and the rest, as they say, is history.

When I first got the job offer, I was under the impression that I’d be working from home until I was trained up. But after two days at home, I was invited into the office to get settled in and meet some people. With social distancing measures in place, it’s been a comfortable working environment.

My time here has flown by; everyone’s so friendly and it seems like there is always something new to learn. I’m excited more than anything, to continue developing. I’ve already talked myself into a Node4 charity skydive when the next opportunity comes up!

Interested in a career at Node4? Take a look at our current opportunities.